Gene Barry is an Irish Poet, Art Therapist, Counsellor, Hypnotherapist and a Psychotherapist from County Cork Ireland. He has been published widely both at home and internationally and his poems have been translated into Dutch, Spanish, Arabic, Irish, Romanian, Hindi, Albanian and Italian. 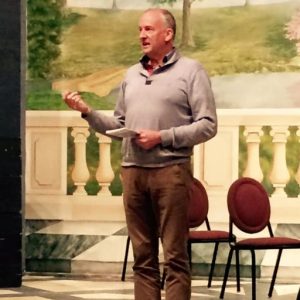 Barry is founder and chairman of the Blackwater International Poetry Festival, http://www.blackwaterpoetryfestival.com. He is also the founder of the world-famous Blackwater Poetry Group on Facebook. He is a publisher and editor with the publishing house Rebel Poetry.

Gene has read in Australia, Holland, South Africa, Kosovo, England, St Lucia, The Seychelles, Scotland, France, Belgium and Texas, Oklahoma, Rhode Island, Arkansas, Miami, NY, Michigan, Florida and Massachusetts. He has been the guest poet at numerous Irish poetry venues. In 2015 he was chosen to represent Ireland at the inaugural Rahovec International Poetry Festival in Kosovo. That same year Barry was the guest poet at the St Patrick’s Day celebrations in Austin and Dallas Texas, Enid Oklahoma and Little Rock Arizona.

Barry’s chapbook Stones in their Shoes was published in 2008. In 2010 Gene was editor of the anthology Silent Voices, a collection of poems written by asylum seekers living in Ireland. He additionally edited the 2012, 2013 and 2014 editions of The Blue Max Review and Inclusion as part of the Blackwater International Poetry Festival. In 2013 his collection Unfinished Business was published by Doghouse Books, a collection that has been critically acclaimed. In 2014 he edited Irish the anthology fathers and what must be said.

In 2015 Barry edited The Day the Mirror Called and MH Clay’s book son of fred. His third collection Working Days was published by Authors Press in 2016.

Gene’s fourth book, Flaking the Rope was published in Boston in January 2019 by Nixes Mate.

Gene has had a number of short stories published and is presently editing his first novel.